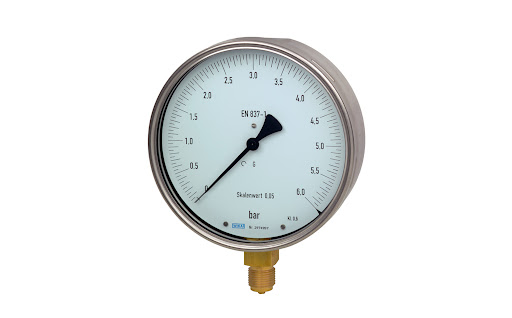 Before we talk about the Vika temperature gauge, we must first get acquainted with the concept of temperature.

Temperature is a sign of the average speed of the molecules that make up an object.

In simpler terms, temperature is a measure of the warmth or coldness of objects.

Temperature is a sign of the average speed of the molecules that make up an object.

Gauges are devices that can measure temperature in mechanical installations according to environmental conditions and related standards.

Other types of gauges are used for a variety of purposes, such as measuring mechanical strain.

Gauges are available in different types of oil and vacuum, hand and digital, differential and negative, diaphragm and..

The measuring range and location of the sensor in the gauge are the factors in choosing the model and its type.

Among the heat and temperature measuring instruments, Vika temperature gauge is one of the high quality and widely used instruments that has been marketed in different models.

Basically, measuring temperature is very important in different projects and can affect the progress of a reaction or a process.

For this reason, various companies are looking to produce sufficient and suitable instruments for measuring temperature, and the Vika thermometer is one of them.

Vika temperature gauges have different types due to the changes that have occurred in the appearance and in the parts used in it, and their applications are different from each other.

They are the simplest and oldest type of thermometer, which are designed based on the change in volume of mercury due to changes in temperature.

These thermometers are of little use and are mainly used in the medical process and measurement of fever.

The body of the thermometer is graded to change the volume of the mercury.

This thermometer is almost like a mercury thermometer in which the volume change of alcohol is used as the main basis for measuring temperature.

These thermometers have several advantages over mercury thermometers, such as lower toxicity of alcohol than mercury, as well as use in the temperature range of 0 to 100 degrees Celsius.

These thermometers use a semiconductor material whose resistance to ambient temperature changes.

This change in resistance manifests itself as a change in electrical current, which is eventually reported as digital numbers. 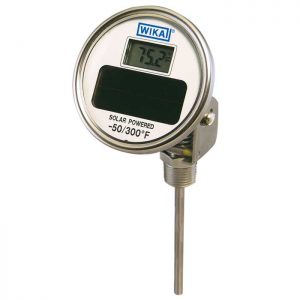 Thermocouples are made of two different and interconnected metals.

The arrival of heat or a change in temperature causes a potential difference at the junction of the two metals.

Finally, using mathematical equations and this potential difference, the ambient temperature can be measured.

Thermocouples are very popular in industry and are usually used in the high temperature range.

The basis of these thermometers is that the temperature changes the wavelength and frequency of the waves, which can ultimately be reported as heat.

These thermometers are non-contact and can remotely reflect waves on the desired surface or in the environment and measure its changes.

These thermometers are the best choice for measuring very high temperatures for long distance measurements.

Vika is one of the manufacturers of gauges and instrumentation, which is a product of Germany.

Vika temperature gauge is one of the most accurate products, which is in a suitable range in terms of accuracy and economic efficiency.

Many instruments are used to measure temperature, the most common of which are the transmitter temper and the switch temper.

Temperature gauges or thermometers are precision instruments used to measure and display temperature.

These tools are one of the most widely used items in heating and cooling systems, power plants, factories and large buildings and are widely used in industry.

Vika temperature gauge can be graded based on different units of measurement such as degrees Celsius or Fahrenheit, which are usually graded and supplied according to the criteria of the consuming country or the country of production of the temperature gauge.

Vika temperature gauges are available in different types of mercury, alcohol, bimetal, gas and.. A good temperature gauge should have a sturdy body on the outside and a precise and quality mechanism on the inside and be properly calibrated.

Show temperature changes in the range on the screen correctly and with regularity and uniformity, and also in terms of how the hand moves without jumping and smoothly move back and forth in the path.