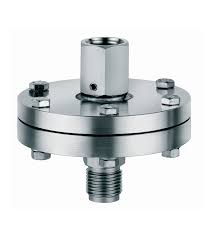 Equipping the supply and equipment industry of oil, gas and petrochemical industries, selling all kinds of flood diaphragms

Diaphragm sealing or flood diaphragm is a flexible membrane that insulates a chamber. The flexible nature of this seal allows the pressure effect to pass through the barrier but does not allow the existing material to pass. A common use for diaphragm seals is to protect pressure sensors from the fluid being measured.

Because diaphragm seals must be very flexible, elastomers are commonly used, including a wide range of general and specialized tires. Metal diaphragms made of stainless steel of various grades, Monel, Inconel, Tantalum, Titanium and other metals are commonly used where high pressure levels and special chemical compatibility are required. .

Diaphragm seals, also known as chemical seals or gauge guards, are used to protect a process fluid from a pressure sensor. Examples of this application are as follows:

Guide to using a flood diaphragm

In many cases, line control is virtually impossible without selecting a flood diaphragm.

Among the variables that should be considered in choosing the aperture:

Also, in conditions where the fluid is High Viscosity, we must use the diaphragm of the seals. Therefore, in the case of fluids with the following properties, we should use a flood diaphragm:

Seal diaphragms, also known as chemical diaphragms, are also used for applications where the distance between the measuring sensor and the process must be the same.

The flood diaphragm in a system has two functions:

The part of the diaphragm that is in contact with the process is insulated with a flexible diaphragm. The space between the aperture and the measuring sensor is usually filled with an oil.

In many cases a capillary is provided between the diaphragm and the measuring instrument to eliminate or minimize the effects of temperature on the measuring sensor. 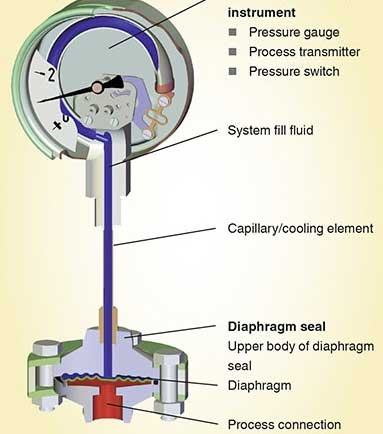 The shape of the flood diaphragm

The diaphragm seal to  both  is :

1- Integral box-like shape and diaphragm inside it

2- Flange type is like two flanges that are placed on top of each other and the diaphragm is located in the middle of it .

The figures below show that the diaphragms of the seals are assembled with a pressure gauge. 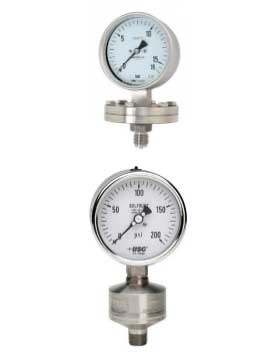 So if you have a Diaphragm Pressure Gauge or the so-called pressure gauge is delivered to you assembled on a flood diaphragm, you have a diaphragm.

Pressure is applied to the lower diaphragm and the gauge moves. Some manufacturers, such as Vika, produce diaphragms up to 360 psi. The application of diaphragms in the near-vacuum pressure range is greater than the bellows model. Silicone, the top of the curtain is filled.

Diaphragm material can be selected from metal or non-metal. Rubber and leather are common types of non-metallic diaphragms. Non-metallic diaphragms are usually made in large dimensions and are used to measure lower pressures. Therefore, these diaphragms need a retaining spring to prevent them from bending in equilibrium. Metal diaphragms are made of bronze, brass, copper alloys, stainless steel, beryllium and special alloys and can be flat. Or corrugated.

The dimensions of metal diaphragms are small and depend on the thickness of the metal used, the modulus of elasticity, the shape and the number of folds of the diaphragm.