Fiber optic technology and its application in industry 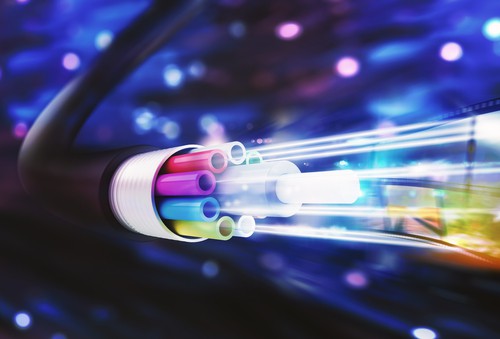 Fiber optic technology and its application in industry

Fiber optics is one of the high speed data transmission environments. Today, fiber optics is used in different cases such as: landline and long distance telephone networks, computer networks and the Internet. Fiber optics is a strand of glass fibers, each of which is about the thickness of a human hair and is used to transmit information over long distances.

An optical fiber is made up of three different parts:

A thin glass core at the center of the fiber where light signals travel.

Cladding is the outer part of the fiber that surrounds the core and returns reflected light to the core.

Plastic coating that protects the fiber from moisture and other vulnerabilities.

Hundreds and thousands of examples of the above optical filaments are organized into batches and form optical cables. Each fiber optic coil is protected by a cover called a Jacket. Optical fibers are presented in two main groups:

Used to send a signal on any fiber, such as a telephone

One or more “optical amplifiers” are used to prevent attenuation and loss of optical signals. Optical amplifier consists of several optical fibers with a special coating. The doping section is pumped using a laser. When the attenuated signal reaches the doping coating, the energy produced by the laser causes the doped molecules to be converted to lasers. The doped molecules will then reflect a new and stronger optical signal with the same properties as the attenuated input signal. (Laser amplifier)

The recipient’s task is similar to the role of a sailor on the deck of a ship receiving a message. This device receives digital optical signals and after decoding, sends electrical signals to other users (computer, telephone, etc.). The receiver uses a “photocell” or “photodiode” to detect light.

The benefits of fiber optics

Low power consumption: Due to the fact that the signals in the optical fiber are attenuated less, so it is possible to use transmitters with low power consumption compared to electric transmitters (which use high voltage).
Non-flammability: Due to the lack of electricity in the optical fiber, there will be no possibility of fire in this regard.
Light weight: The weight of a fiber optic cable is far less than that of a copper cable, and this factor is very important in the operation, installation and maintenance of the fiber.

Flexibility: Due to the flexibility of fiber optics and the ability to send and receive light from them, it is used in different cases such as digital cameras with special applications such as medical photography and plumbing.
Distance: Optical fiber can be used to connect networks that are far apart (connecting local area networks (LANs) to each other). It is worth noting that before the use of fiber optic cables, communication between LANs was established by telephone or radio waves.

Stability: In fiber optic cables, the possibility of penetration and disruption of data transmission is less and prevents the impact of various electromagnetic noises, including radio noise or noise from the proximity of cables on the data being transmitted. In general, optical fibers interfere with others Communication channels, both optical and electrical, are well protected. That is, they have excellent acceptance of radio frequency interference (RFI) and electromagnetic interference (EMI).
Speed: Fiber optics have the ability to transmit large amounts of information, both digitally and analogly.
Optical propagation: eliminates the need for a common ground between the transmitter and the receiver.
Fiber repair: Optical fiber while the system is on, without the possibility of short circuits in the transmitter or receiver.
Security: Fiber optics offer a degree of security and privacy. Because fibers do not radiate energy. For an intruder, it is difficult to detect the transmitted signal.

High bandwidth: This bandwidth has now reached 170 gigabytes per second, and scientists believe it can be upgraded to several hundred terabytes. The SMF fiber optics currently in use have a bandwidth of 40 GB.
Do not use electricity for communication: because light is produced at the beginning of the path and this light is received at the end. It no longer needs electrical power and also has a very high safety against noise.
Do not establish an unauthorized branch: Because in order to establish a branch, the fiber must first be cut and the fiber receiver must be installed. And this action is time consuming; Bed restraints can quickly identify the location using debugging tools.
No need for a repeater for several kilometers: Due to the use of light, if the core material is good, the signal will not weaken much at distances of several kilometers.

Limitations and weaknesses of optical fibers

Requirement of full accuracy when cabling
Possibility of breaking if the fiber angle exceeds a certain
limit. Tensile strength is limited for fibers with different capacities.
Full impact protection, for fibers that pass through the pool.

Application in Telecommunications: One of the most common applications of fiber optic data transmission by Laser light Is.
Application in sensors: The use of fiber optic sensors to measure physical quantities such as electric current, magnetic field,Pressure ،Heat Displacement, Seawater pollution,Fluid level Gamma and X-ray radiation has started in recent years. In this type Sensors, Optical fiber is used as the main element of the sensor in such a way that the properties of the fiber change under the quantity field being measured and are affected by the amount of quantity intensity.

Military applications: Optical fiber has numerous applications in the defense industry, including communication and control with radar antennas, control and guidance of missiles, communication of submarines (hydrophone).

Medical applications: Fiber optics is widely used in the diagnosis of various diseases and tests in medicine, including cancer gland dosimetry, diagnosis of internal defects, laser surgery, use in dentistry, and measurement of fluids and blood. Optical fibers are also used in devices called endoscopes or endoscopes to be sent into the trachea, esophagus, intestines, and bladder and to be directly visible inside the human body.

Application of fiber optics in lighting: One of the applications of fiber optics that became popular in the late twentieth century as a lighting technology and has developed and grown in the last few centuries is its application in lighting systems. In this technology, light from a light source that can be artificial light (electric light bulbs) or natural light (Sunlight) Enters the optical fiber and is transmitted to the place of consumption. In this way, light is transmitted to any point that is not in the direction of direct radiation. The advantage of this light, which has led to the rapid growth of application and much attention to this technology, is that it lacks electricity, heat and dangerous ultraviolet radiation (pure and safe light) and also that with this technology, it can receive daylight (without heat and ultraviolet rays). Violet) also moved into buildings and places inaccessible to sunlight.