The result of displacement due to force action [Bourdon spiral tubes, flat or corrugated diaphragm, capsules and various other manometers ]

Pressure is determined by measuring some controlled properties of pressure such as volume, thermal conductivity and so on. The McLeod Gauge vacuum gauge is an inferential method for measuring vacuum

Where p and V refer to pressure and volume, respectively, and commonalities 1 and 2 refer to initial and final conditions. A typical McLeod gauge is made of glass. Refer to the figure below: This includes a “C” capillary, a “B” lamp, and a mercury sprayer attached to the lower end of the glass tube so that it can be moved up and down. The measured pressure (unknown pressure) is connected to the upper end of the glass part. When the mercury level in the gauge is less than the “F” cut, the unknown pressure gauge, including lamp B and capillary C, fills. When the mercury stack is moved upwards, the level gauge rises, and when it reaches the “F” cut, a known volume of pressurized gas is trapped for measurement in lamp B and capillary C. 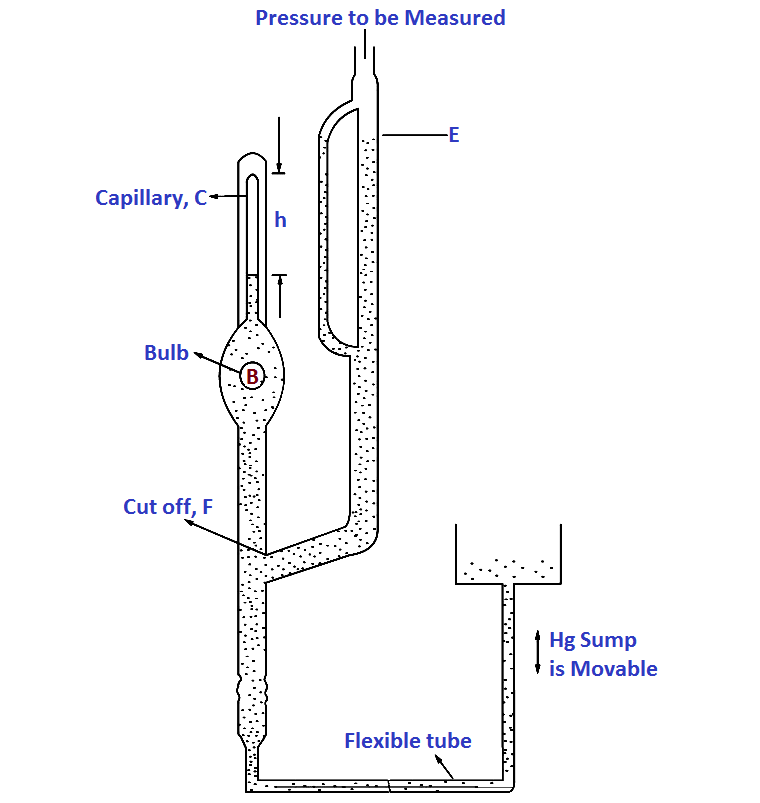 Mercury then enters the bulb and capillary. Assume that the spray has reached a point where the pressurized gas to fill the cut-off volume is now compressed to the volume indicated by column h. Suppose the original volume after the mercury reaches F is V0. This pressure is measured in p1