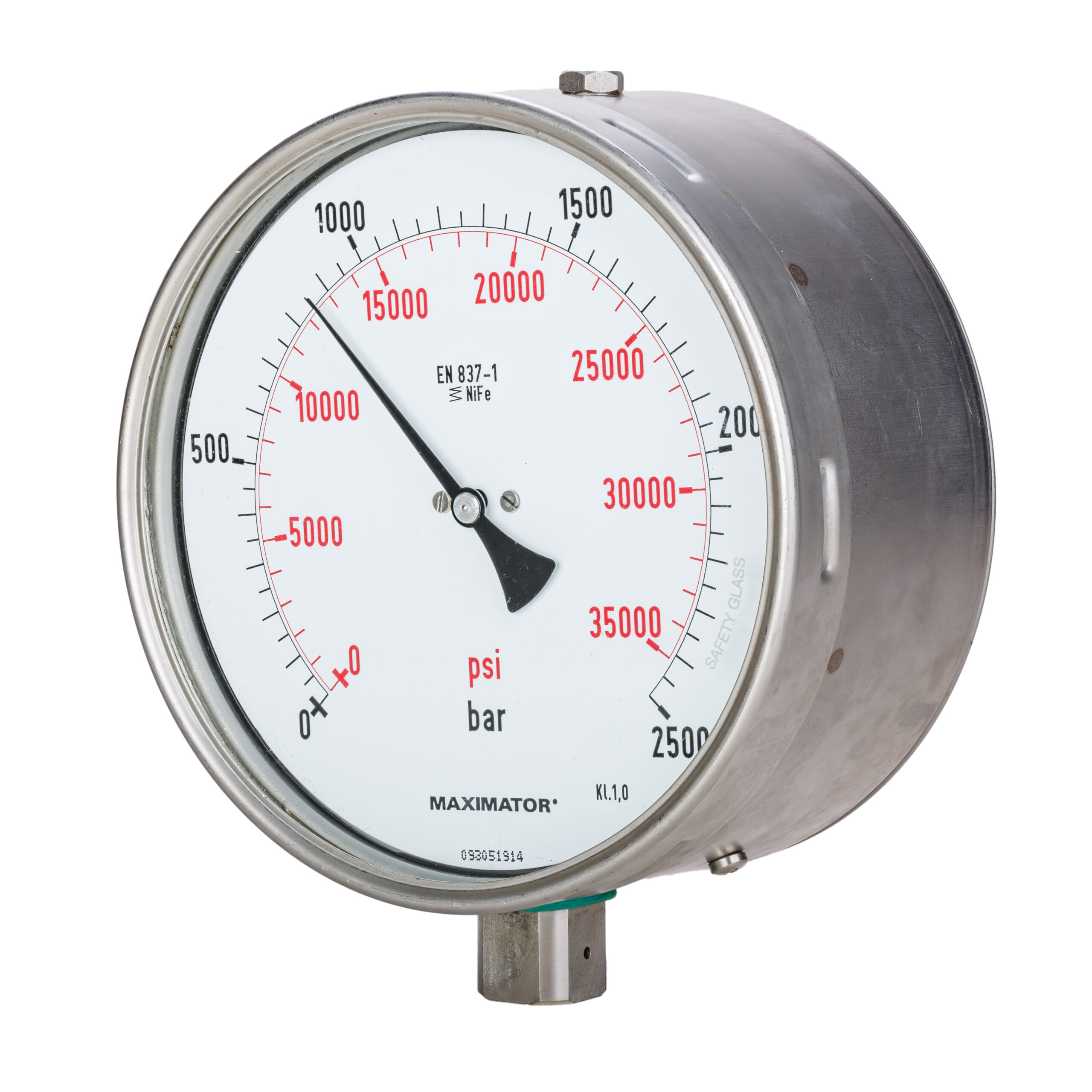 Pressure is a force per unit area exerted by a fluid perpendicular to a boundary (as opposed to shear stresses applied parallel to the boundary).

The SI unit for Pascal pressure (Pa) is one Newton per square meter (N · m-2 or kg · m-1 · s-2). This special name for the unit was added in 1971. Previously, pressure in SI was expressed in units such as N / m². When shown, zero references are given in parentheses following the unit, for example, 101 kPa (abs). Pound per square inch (psi) is still widely used in the United States and Canada, especially for cars. A letter is often added to the psi unit to indicate zero measurement references. psia for absolute, psig for gauge, psid for differential, although pressure measurement with these 3 operations is prohibited by NIST. Figure 1 shows the relationship between absolute and confusing. Note that the base point for the gauge scale is [0 kPa (g)] or the standard atmospheric pressure is 101.3 kPa (a). Most pressure gauges in a factory are confusing. Absolute measurements are usually used where the pressure is lower than the atmosphere. This is usually around the condenser and vacuum building.

Principle of operation: Almost all pressure transducers work on the basis of elastic deflection, the applied pressure causes deformation or deflection of some components. Bourdon tubes are circular tubes with an oval cross section. Ambient pressure is applied inside the pipe. External pressure on the oval cross-section forces it to round. Due to the curvature of the tube ring, the Bourdon tube bends as shown in the direction of the arrow.

Usage: Bordon is often used in harsh and high pressure environments due to its strong structure, but it can also be used for very low pressures. The response time, however, is slower than the blues or diaphragm. Bellows elements are made of tubular membranes that are wrapped around the perimeter. The membrane is attached to the source at one end and to the marker device or instrument at the other. The bellows element can provide a long range of motion (motion course) in the direction of the arrow when applying inlet pressure.

The pressure device is located around the pressure medium on one side and the indicator medium on the other side. The deviation caused by the pressure in the container will be shown in the direction of the arrow.

Usage : Diaphragms represent fast and accurate pressure. However, the movement or stroke is not as large as the tail. Pressure enters the capsule and, if fixed only at the air inlet, can expand like a balloon. This arrangement is not much different from the diaphragm except that it expands on both sides. The capsule consists of two twisted circular membranes (usually made of stainless steel) that are tightly closed around the perimeter. Pressure is applied to the inside of the capsule and the shock motion created by the direction of the arrow is shown. Most pressure transmitters are based on the concept of pressure capsules. They are usually able to measure differential pressure (ie, the difference between high-pressure inlet and low-pressure inlet) and are therefore commonly referred to as DP transmitters or DP cells. The figure shows a typical DP transmitter. A differential pressure capsule is mounted inside a chamber. One end of a power bar is attached to the capsule assembly to move the capsule out of the chamber. The sealing mechanism is used where the force rod penetrates the chamber and also acts as the axis point of the force rod. In the chamber, it is anticipated that high pressure fluid will be applied to one side of the capsule and low pressure fluid will be applied to the other side. Any pressure difference causes the capsule to deflect and cause the force bar to move.

There are the following programs: – A strain gauge (sometimes known as a strain gauge) is a sensor whose resistance changes with the applied force. This force converts pressure, tension, weight, etc. into changes in electrical resistance that can be measured. When external forces are applied to a fixed object, stress and strain are the result. Stress is defined as the internal resistance forces of a body and strain is defined as the displacement and deformation that occurs.

The electric charge can be transferred from one metal plate to another. Capacitor capacity is a measure of its ability to store charge. The capacitance of the capacitor is directly proportional to the area of ​​the metal plates and inversely proportional to the distance between them. It also depends on the nature of the insulation material between them. This characteristic, called the transmittance, is a measure of how much the insulating material increases the capacitance of the capacitor to store the load.

C is the capacity in Farads

A is the area of ​​the pages

D is the spacing of the pages

ε is the permeability of the insulator

Capsule, differential pressures can be felt by changing the capacitor

It varies from capacitors as the pressure throughout the cell.