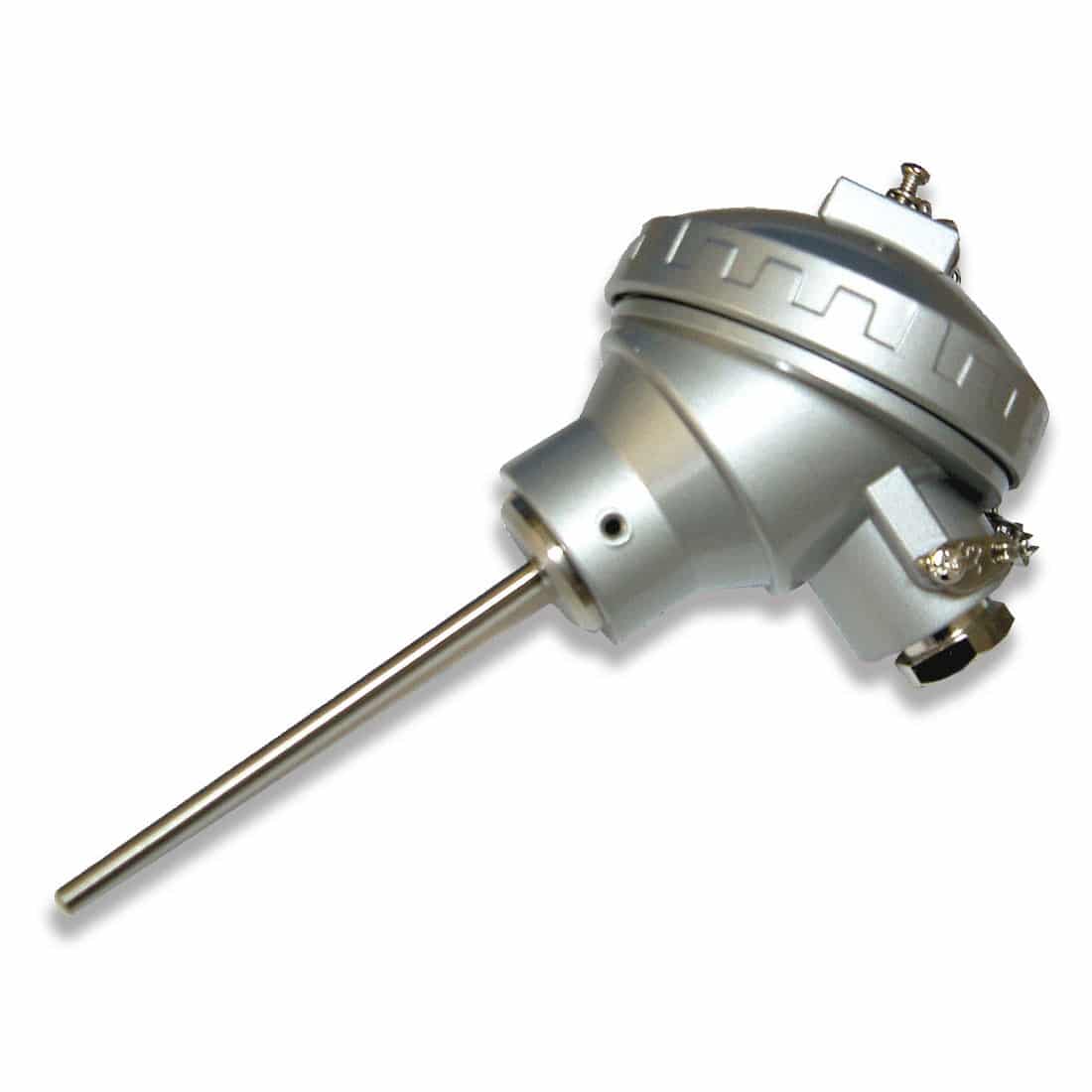 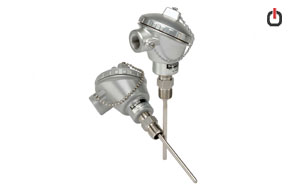 Types of temperature resistance sensors or RTD are available

RTDs are very accurate compared to thermocouples and are gradually replacing thermocouples to measure temperatures below 600 ° C. It is worth noting that in analog circuits, RTDs are mostly used as temperature sensors.

RTD sensors based on manufacturing method

RTD sensors are divided into two types, winding and thin film, depending on how they are made, which we will describe below:

Most RTD elements consist of a finely wound coil around a ceramic or glass core. This element is usually very brittle, so it is often placed inside a sheath probe to protect against short circuits and create vibration resistance. Coiled RTDs are stable but have a slow thermal response due to the low electrical conductivity between the Pt and the measured point. These types of sensors are suitable for working in any environment and any type of application.

In the RTD sensor, a thin layer of platinum film is placed on a ceramic layer in the form of resistance, and then the film is covered with glass or epoxy to resist moisture and vibration. Thin film RTDs have a fast thermal response, low sensitivity to vibration and the ability to create higher resistance for a given size. These RTDs are less stable than coiled RTDs, but because of their much lower price, they are widely used.

The components of resistor sensors include resistor element, process connection, wiring, cold end, RTD tube and outer diameter, each of which is described below:

Process connection in RTDs, like thermocouples, includes all standard connections such as compression, welding, spring and so on.

RTDs are made in two, three and four wires. Four-wire RTDs are used to accurately measure temperature in special cases and have two wires to transmit sensor current and two wires to measure voltage on the sensor element. Insulation of sensors and wires is selected according to the type of application, the insulation of wires is often Teflon and fiberglass.

Cold connection in RTDs can be in the form of two branches, bare wire, terminal and other connections related to the thermocouple.

(Sensors, shells and other components) 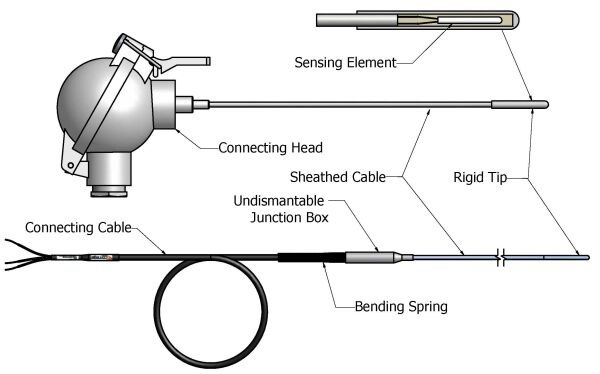 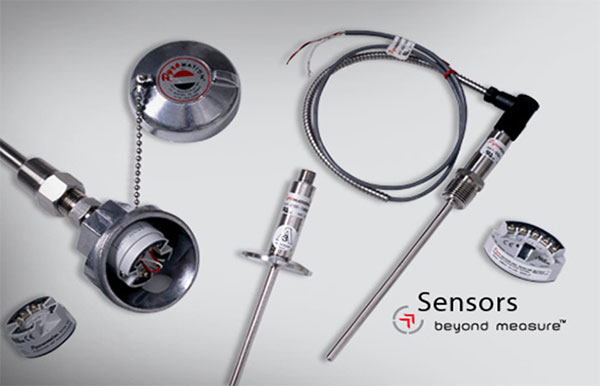 RTDs are classified based on the type of metal used in their sensors.

Platinum element RTDs are the most common type of RTD used in the process industry. Platinum is the most common metal for RTDs, including the following properties of platinum The two main types of platinum RTDs are known as PT100 and PT1000, but other sensors such as PT50, PT500 and other platinum families are also available, depending on the type of user and typically PT100 sensors. They are mostly used in manufacturing industries. It is worth noting that increasing the cable length in PT1000 sensors with two wires causes less error than PT100 sensors.

RTDs with platinum sensors are available in PT100, PT500 and PT1000, the most important of which is PT100. The table below shows the temperature coefficient and sensitivity of various platinum sensors.

* All values ​​of temperature coefficient of resistance in the above table are equal to 0.00385 ohms per degree Celsius.

PT100 sensors measure the temperature range of -200 to 600 ° C, and with increasing or decreasing each degree Celsius, their resistance decreases or increases by 0.385 ohms  . Therefore, even a small error in measuring the resistance, for example, the resistance of the wires leading to the sensor, can cause a large error in measuring the temperature. Unlike thermocouples, the PT100 does not require special cables to connect.

The PT100 is also relatively resistant to electrical noise and is therefore suitable for measuring temperature in industrial environments, especially around motors, generators and other high-voltage equipment. It is worth noting that this model has achieved many standards. Which is named below:

Many factors affect the choice of PT100 sensor, some of which include the following:

In these sensors, the sensor is made of platinum and has a resistance of 500 ohms at a temperature of 0 ° C.

Nickel RTD elements have a higher temperature coefficient than platinum and copper RTD elements and have good corrosion resistance, but poor linearity, limited accuracy, lower repeatability and a relatively small operating temperature range of -80 to 260 ° C. Have. Nickel RTDs are less expensive than platinum, and their elements are commonly used in applications where accuracy is not an issue.

This model is the most common and simplest type of connection in RTDs and is used when low measurement accuracy is used.

In this method, a maximum of 100 meters of cable can be used. Three-wire RTDs are able to compensate for the impact of interface wires, but incur the additional cost of being three-wire. There are several ways to compensate and find the resistance of the RTD element. One common method is to use Ohm’s law.

If we are the same sex and length, we have three wires

Three-wire RTD is commonly used in industrial applications to eliminate the average resistance of wires. When the distance between the sensor and the measuring or control device is long, using a three-wire model instead of four wires can save costs. In this method, a maximum of 600 meters of cable can be used. 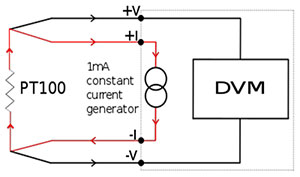 Four-wire RTDs have the best compensation because they are able to fully compensate the strength of the wires regardless of the length of each wire and be used in sensitive services that require high accuracy. In this method, 4 sensing points eliminate the voltage drop across the measurement that leads to an error to increase the accuracy of the measurement. Each thermoelectric voltage eliminates leaks generated by different wires or screw connections by reversing the 1 mA current direction and connecting to a digital voltmeter (DVM). Thermoelectric voltages are generated in one direction only.

Once the RTD resistance has been determined, it must be converted to its corresponding temperature value. In transmitters, one of the following two methods is used:

Based on RTD standard

In IEC-751, the maximum value of “sensor interchangeability error” is defined at a given process temperature in two classes, A and B. These classes are used to specify platinum RTDs.

In Class B, the accuracy of RTDs is defined as ± 0.3 + C + (0.005T) ͦC, where T is the process temperature in ͦ C. Because Class B RTDs are cheaper than Class A RTDs, they are more widely used in industry.

The amount of resistance change due to temperature change is calculated as follows.

* The standard value in the table above is IEC751.

Diagram of resistance changes in temperature in RTD sensors

As shown in the figure below, the higher or lower the operating temperature of the sensors, the lower the sensor accuracy.