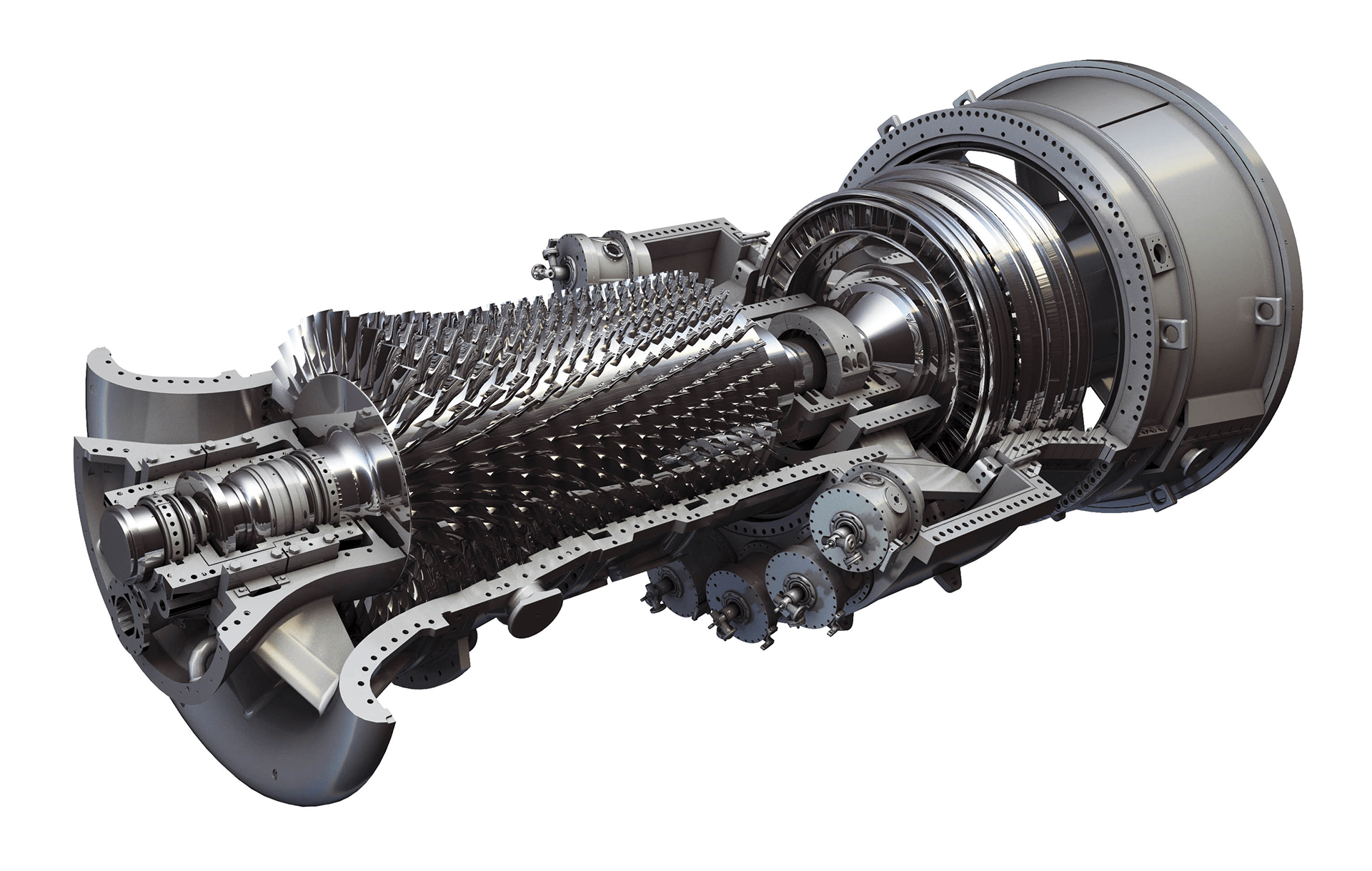 A gas turbine is a rotating machine in which the chemical energy of a fuel is converted into mechanical or kinetic energy in terms of power axis. In other words, it is a mechanical device or a driving force. It uses a gaseous working fluid for this purpose. The generated mechanical power can be used by industrial devices. There is a continuous flow of working fluid in the gas turbine. Gas turbines generate forces that produce shaft power. Gas turbines are used to propel aircraft, which converts fuel energy into kinetic energy to generate propulsion. The figure below shows a typical view of a gas turbine.

The main applications of gas turbines are found in the following cases:

As a direct and mechanical actuator for various industries

The working principle of the gas turbine

The operation of a gas turbine is based on the Brighton thermodynamic cycle. The Brighton cycle consists of two adiabatic work transfers and two constant pressure heat transfer processes (Figure below). The gas is subjected to isotropic and adiabatic pressure in state 1 to 2. This process increases the temperature, pressure and density of the gas. Then, heat with constant pressure is added to state 3 in state 2. For a gas turbine, it adds a process of heat combustion. During mode 3 to mode 4, the gas passes through an adiabatic isentropic turbine, which reduces the temperature and pressure of the gas. In the case of the Brighton closed gas turbine cycle, heat is released from the gas through mode 4 and mode 1 through a heat exchanger.

Let us understand the principle of operation of a gas turbine with the following example:

In this case, the exhaust gas is released at high pressure but in the reverse direction. Now another case is what if we add a set of turbine blades to this return exhaust gas?

Simply put, in a gas turbine, hot gases travel through a multi-stage gas turbine. It has fixed and movable blades just like steam turbines. The fixed blades adjust their speed and direct the moving gases towards the rotor blades. The turbine shaft is connected to a generator.

The working principle of gas turbine in the power plant is as follows:

In a gas turbine power plant, there is a generator known as an electric car, and this generator needs a main engine, which is a gas turbine, to generate electricity, as shown in the figure below.

The following points should be considered, such as:

For the oil and gas production process, the turbine is connected to a compressor or pump instead of being coupled to the turbine.

When a gas turbine is used to drive a compressor, a similar arrangement to a steam turbine is considered.

Header tanks and lubricating oil are required in the auxiliary piping system.

The exhaust system must be considered to have several heat recovery systems, ie a process heater or a steam generating plant.

Maintenance and operation of all machines must be provided.

Outside the compressor house, combustion air must be transferred from a safe place to the turbine burner. Most likely needed are input shutter and filter.

In the figure below, gas turbines have three main parts: 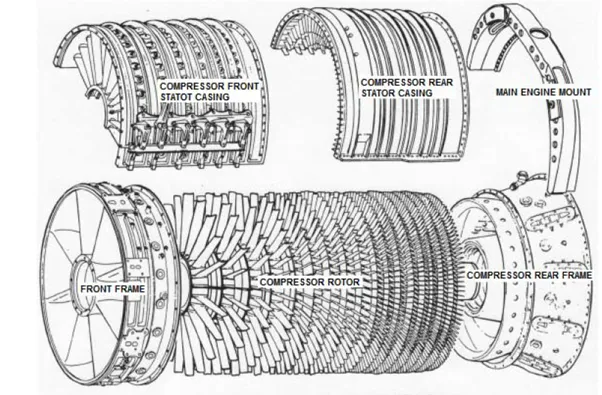 The fuel is injected at the upper end of the burner in the form of a highly atomic spray. Fuel nozzles may be simplex or dual-burner. Some gas turbines are “dual fuel”, meaning that they can burn a mixture of gas and liquid fuel. 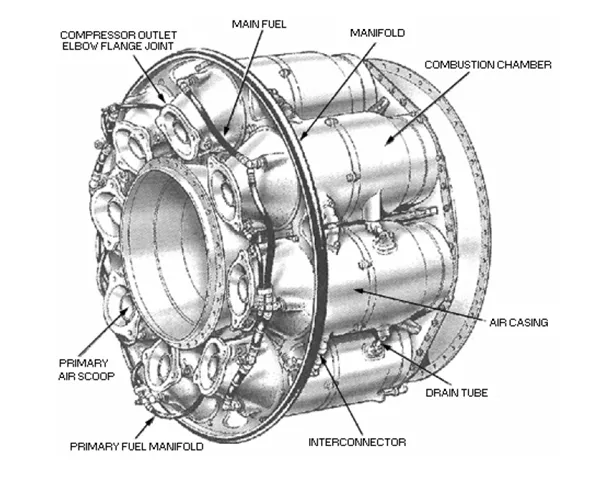 There is a multi-stage gas turbine from which hot gases move and kinetic energy is converted into horsepower. A gas turbine, just like a steam turbine, has fixed and moving blades. The purpose of fixed blades is to direct moving gases toward the rotor blades and then to adjust their speed. The turbine shaft is connected to a generator.

The hot gases from the gas turbine come out of the exhaust. The exhaust chamber consists of an internal and external chamber.

Other parts are gas turbines

The following types of gas turbines are listed: 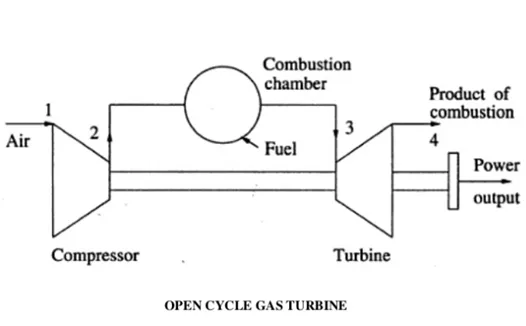 The working fluid used in a closed air cycle gas turbine or any other suitable medium leaving the compressor is heated in the heater by an external source at a relatively constant pressure. The air is then transferred to the turbine with high pressure and high temperature. The turbine fluid is then cooled to its initial temperature by some external cooling agents and then transferred to the compressor. In this way, the working fluid is continuously used in the system and the required heat is given to the fluid by the heat exchanger without significant change in its phase. The following figure shows a picture of a closed cycle gas turbine.

These turbines are also known as miniature gas turbines.

Scale jet engines are capable of producing up to 22 Nm of thrust and are easily built by most thoughtful mechanical engineers with basic engineering tools such as metal turning.

Factors that limit the size and efficiency of a gas turbine include: cooking temperature, compression ratio, mass flow, and centrifugal stresses.

The most important areas in the design of a gas turbine that determine the engine. The efficiency and life of the gas path is hot, ie the combustion chambers and fixed nozzles of the first stage of the turbine and rotating buckets. The components in these areas make up about 2% of the total cost of the gas turbine, but control the output and efficiency of the gas turbine. Nickel superalloys are commonly used for gas turbine nozzles and buckets. They are vacuum coated with special metals (platinum-chromium-aluminide) to protect against hot corrosion that occurs at high temperatures in the presence of contaminants such as sodium, vanadium and potassium.

To provide additional turbine output by increasing the final compressor pressure, additional compressor steps can be added to the compressor rotor assembly to achieve a higher compression ratio. Natural gas, diesel oil, residues or crude oil can be used as gas turbine fuel. As the ambient temperature and altitude increase, the air density decreases. This significantly reduces the output power and efficiency of the gas turbine. Ambient temperature and altitude changes do not affect steam and diesel plants.

Factors that affect the performance of gas turbines are:

The major share of gas turbine production is controlled by the following organizations:

The top three companies in the list above together have more than 80% of the gas turbine market share.