The orientation, luminosity, and monolithic properties of lasers have led to many useful applications for measurement and inspection in the field of structural engineering and industrial machine tool control processes. In this section, we also consider determining the distance between two points and investigating pollution.

Coaxing is one of

the most common industrial uses Laser Is alignment. It is useful to use laser orientation in order to have a direct reference line for aligning machines in aircraft construction and also in structural engineering for building bridges or tunnels. In this regard, lasers have well replaced optical devices such as air conditioners and telescopes. A low-power helium-neon laser is usually used, and coaxialization is generally done in the form of a quadratic solid-state detector.

The point of contact of the laser beam on the receiver with the amount of light current on each quarter of the circle is determined. As a result, coaxiality depends on an electrical measurement and therefore does not require visual judgment of the experimenter. In practice, the alignment accuracy is from about 50m to about 25m.

has also been used to measure distance. How to useLaserIt depends on the size of the desired length.
For short distances up to 50 meters, interferometric methods are used in which a frequency-stabilized helium-neon laser is used as the light source. For medium distances up to about 1 km, telemetry methods including slope modulation are used. For longer distances, the time it takes for the pulse of light emitted by the laser to be reflected from an object can be measured. 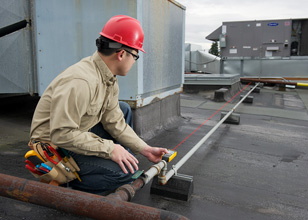 Slowly The two reflected beams are then reassembled so that they overlap, and their amplitude is measured with a detector. When the position of the object changes in the direction of the beam by half the wavelength of the laser, the interference signal goes from a maximum to a minimum and then to a maximum again.

Therefore, an electronic freeze counting system can provide information about the displacement of an object. This method of measurement is commonly used in precision machining workshops and allows lengths to be measured with an accuracy of one in a million. It should be noted that in this method only the distance to a source can be measured. The advantage of this method is the speed of accuracy and adaptation to automatic control systems.

For larger distances, the amplitude modulation telemetry method is used and the distance is determined by the phase difference between the two laser beams and the distance is determined by the distance difference between the two emitted and reflected beams. Again, the accuracy is one in a million. This method is used in land surveying and mapping. For distances longer than 1 km, a short laser pulse emitted by a ruby ​​laser or CO2 laser is measured by measuring the flight time.

These applications are often of military importance and will be discussed in a separate section. Civilian applications such as measuring the distance between the moon and the earth with an accuracy of about 20 cm and determining the range of satellites can also be mentioned.

the velocity of liquids and solids using the Doppler accelerometer method. In the case of liquids, the laser beam can be irradiated into the liquid and then the light scattered from it can be examined. Because the liquid is fluid, the frequency of the scattered light differs slightly from the frequency of the incident light due to the Doppler effect. This frequency change is proportional to the velocity of the liquid. Therefore, by observing the signal of the woman scattered between the two rays of light and the incident light in a detector, the velocity of the liquid can be measured without contact. It is also very accurate due to the high uniformity of the laser light for a wide range of speeds.

One of the special laser speedometers is angular velocity measurement. The device designed for this purpose is called a laser gyroscope and consists of a laser whose cavity is in the form of a ring that uses three mirrors instead of the usual two. This laser can provide light emission fluctuations both clockwise and counterclockwise.

Resonant frequencies for both directions of propagation can be obtained by using the condition that the length of the resonator (ring) is equal to the correct multiple of the wavelength. If the ring is rotating, the angle of the intensifying mirrors will move a very small but limited amount during the time it takes for the light to go a full circle.

The effective length for a beam rotating in the same direction as the resonator is slightly greater than for a beam rotating in the opposite direction. As a result, the frequencies of two beams that rotate in opposite directions are slightly different, and the difference between these frequencies in proportion to the angular velocity is intensifying. Angular velocity can be measured by creating a pulse between two beams. Laser gyroscopes allow accurate measurements that are comparable to the accuracy of the most complex and expensive conventional gyroscopes.

are other uses, or in other words, the actual consumption is video discs and audio discs. A video disc carries a recorded video program that can be displayed on a regular television set. Video disc makers record information on a subwoofer that is read by a laser. A common recording method involves groove cuts of different lengths and distances. The depth of these grooves is 1.4 laser wavelengths used in the reading process.

When reading, the laser beam becomes so focused that it falls on only one groove. When the groove is exposed in the path of the laser beam spot, the reflection is reduced due to the destructive interference between the light reflected from the groove walls and to it. The absence of the groove causes a strong reflection. In this way, TV information can be recorded digitally.

One of the other uses of lasers is to write and read information in optical memory in computers. Thanks to optical memory, it is also able to access information density about the order of wavelength. Recording technique is the creation of small holes in a opaque material or a change in the transmitting and reflecting properties of the substrate material, which is achieved by using lasers with sufficient power. And it can even be a photographic film. But none of these sublayers can be deleted. Removable rings are based on ferroelectric and photochromic magnetic heat. Optical memories are also designed using the holographic technique. As a result, although it is technically possible to make optical memories, their economic value is still debatable.

The last application we mention in this section is laser graphics. In this technique, the laser beam is first focused on a light-sensitive screen by a suitable scanning system, while the laser intensity is modulated in terms of amplitude simultaneously with the scan so that it can be generated by a computer. Such as non-contact computer printing systems) or received them as an electrical signal from a remote station (such as video mail).

In the latter case, the signal can be generated by a suitable laser reading system one by one. The remote reading device consists of a low-power laser that focuses the plane to be read on the focused beam. A light detector detects a beam scattered from the dark and light areas on the screen and converts it into an electrical signal. Laser systems Copies are now widely used by many newspaper publishers to transfer copies of newspaper pages.